We are messengers to the Gods 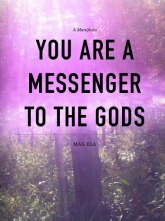 For a while now I’ve been thinking about the greater implications of some of the things we do. The ‘we’ being lawyers and their industrious clients. In brief: what we do is further violence. We believe the violence is justified, since our clients are attacked by  competitors and infringers alike and no one need expect them to take it sitting down. Not defending their legitimate interests would be bad for business and thus bad for society in general.

As the alarming reports on the state of the planet accumulate, there may be good reasons to question this belief in legal warfare. Maybe the belief in the interests of business as being inherently legitimate is what got us into this mess in the first place. In fact, ‘business’ is based on so many beliefs and assumptions that it’s probably wise to question not just those beliefs but even the very basis of doing business.

Business, that is in a larger sense: the creation, buying and selling of products and ideas, is supposed to generate ‘welfare’. In a just world therefore, everybody is competing on a level playing field so as to be able to partake in that welfare and/or to profit of its spoils. If the playing field is not level, then it makes sense to either adjust it – f.i. through legal procedures – or for governments to regulate it by law or via trade agreements. However, our civilisation isn’t exactly just, the playing field isn’t exactly level, and one may well question if what is actually generated is welfare let alone wellbeing for all.

It’s hardly a secret that Western welfare has formidable hidden costs. These costs come in the shape of ‘third world’ working conditions that are little better than slavery, turning the oceans into plastic soup, and overall environmental destruction. We know this, yet it’s business as more-or-less usual – could that be because the biggest hidden cost is our own sanity and we’re already too far gone to recognise the madness?

Arguably a sizeable chunk of mankind is better off now than it ever was, at least in terms of money and health; but the madness lies in the pursuit of technological advances and the accumulation of capital at the cost of the animal world vanishing. How can we say we’re better off now when we are living in a world that is a little emptier every day? How can we even believe what we’re doing is justified if we have lost a proper idea of what ‘justice’ means?

The West has been on the rampage for thousands of years; and we’re coming to the end of the road. I believe this is because humanity has lost any sense of its own place in the greater scheme of things. As people, we have lost the sense of living inbetween the riches of the earth and the riches of the invisible world. Still, it may not be too late to regain sanity.

What I refer to as ‘the invisible world’ used to be the realm of the Gods. People used to believe in many Gods and they saw their own lives as connected to the world of the Gods. The divine was everywhere and so it made total sense to treat the natural world with respect – an ancient tree might be home to the spirit of wisdom, a deer could just turn out to be a God in disguise. The practice of animal sacrifice that is now no more than folk lore, was a way of acknowledging that the taking of life is not an insignificant thing.

What I propose, if only as a thought experiment if you wish, is a new Faith: I propose to assume that the Gods are still with us. They haven’t gone away, we have merely changed the way they interact with us. The Gods are showing us what they have learned through our actions. I propose that we think of ourselves as messengers to the Gods and let our actions reflect how we would like these Gods to reciprocate. Taking the divine perspective into account enables society to re-establish a true sense of justice.

As a society and as individuals we have to start acknowledging again how we are all part of the living world. This should be reflected in our actions and so those actions ought to be non-violent, non-destructive, and non-exploitative – and in brief, they should further wellbeing not violence.

Out here in the West we still seem to be mainly concerned with ‘having a career’ and with advancing technology. Even now, our main worry seems to be how to continue our lifestyle even as we know it to be harmful on a scale the world has not seen since the dawn of Man. Instead of worrying about the demands of business, we need to change our inner sense of justice. We need to think of ourselves as messengers to the Gods, and we need to think of what we would like these Gods to learn from us – because right now the Gods are showing us what it really means to be human; and pretty soon we’ll reap the bitter fruits of that particular knowledge.

(For more information, HERE is a video that expands on this. You can also DOWNLOAD THE eBOOK, or visit the website www.eleima.org)