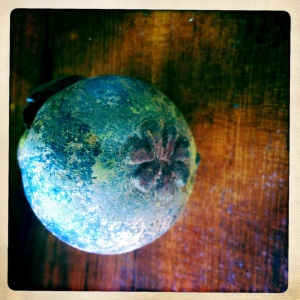 (The world as seen through the eyes of a God. Pic: James Andahl)

The good life. People used to enjoy it, judging by those brightly coloured photographs from the 1950’s and 1960’s featuring all those familiar faces. The good life was Jackie Kennedy smiling her broadest smile, and it was Grace Kelly becoming Princess Gracia of Monaco, and it was every family driving a pink Cadillac. Mothers in the kitchen looking glamorous, and couples sipping cocktails. It was there for the taking when every paperboy could become a millionaire, and on Saturday night everyone went dancing in their local dance hall, or, if you happened to be French, you could just get yourself the good life with a baguette and a bottle of plonk out in the country, with your children stashed in the back of a Citroën DS. The Good Life was The Beatles singing ‘All You need is Love’ on the first world-wide telecast.

The good life, as lived in the good old days, has been and gone. It has been bought and sold, and then it lost its lustre. It was sold to us with the promise of a new golden era of a global market, and then it just evaporated. The good life came hot on the heels of World War II, it was all the rage in 1967, and then it was gone by the time Margaret Thatcher entered the scene in 1975.

‘The good life’ though, was a materialist fantasy, it was never real. It needed people more than people needed it, and of course it disappeared from sight. The good life was an image perfected by advertising agencies. There never was a lot of Jackie to go around to begin with, and there were only four Beatles. The others could merely sing along with songs about pink Cadillacs, they could not actually own one. Still, the fantasy was attractive enough, so why couldn’t it become a reality? Why did the fantasy ever fade?

The first deals with the principles underlying a globalised, capitalist system. The basic promise of globalisation is that of efficient corporations competing for the consumer’s money by offering the best products at the lowest prices. Even at the level of common sense, this idea is obviously flawed. Inevitably, the ‘most efficient’ corporation will drive production costs down by using the cheapest materials possible and offering wages just above the point where workers will go on strike or otherwise become unproductive. Getting the cheapest materials possible leads to disregard of the environment, and paying the lowest wages acceptable leads to a semi-permanent moving of production facilities to countries with ever-lower wages. Meanwhile, governments trying to create job security for their population will compete with other countries by offering the lowest possible tax rates to the very corporations that will hardly pay their workers. When wages are at their lowest and corporate taxes are all but abolished, the last resort for governments to tempt corporations to stay in their respective countries, is offering the best possible social and physical infrastructure. Both kinds of infrastructure cost money, and so governments are driven into debt. Finally, social unrest will be contained through a combination of an ever expanding surveillance state and brute force. Rampant capitalism ushers in a new age of feudalism, with kings of industry running countries and the people reduced to the status of serfs and slaves.

My second explanation of how the fantasy of the good life has been put on the proverbial back burner goes something like this: Globalisation can only function to the people’s benefit if and when the governments of various countries decide that unfettered capitalism is a dead end street. Instead of thinking about what corporations need, governments need to think about what the people need. The people need an education, food, a clean living environment, sex, drugs, a safe place for the night, and they need to be nursed when they’re ill of health. Finally, when the time has come, they need a dignified way of leaving this world behind. On top of that, they need a common, benign culture, an awareness of history and yes, a moral compass. All this runs contrary to the idea of a highly individualised society in which private property is sacred.

I’m not suggesting that the lion shall sleep with the lamb if only industry, money and private property are abolished. I may be a fool, but I’m not that big of a fool. However, what I do suggest is that ‘The Economy’ is shorthand for a present-day ideology that in essence needs destruction in order to sustain itself. You simply cannot have constant production of consumer goods at ever lower prices without someone or something suffering somewhere. Capitalism, such as we understand it, needs the occasional war. From time to time everything needs to be bombed to smithereens, so that the whole thing can begin again. Weapons are consumer goods as well, let’s face it.

Now, bear with me for a bit. All that once was solid dissolving into air may be an inevitable side-effect of a capitalist economy, but creation and destruction are not actually a capitalist invention. In Indian philosophy some 4,000 years ago, there already is the concept of ‘the great breath of Brahma’. Brahma being, roughly speaking, the Ultimate Source of All, which creates and destroys worlds in a cyclical rhythm. Brahma breathes out and the universe is manifested. With an intake of breath the universe is called back to the source and ceases to exist, but on breathing out again manifestation begins anew.

Brahma is obviously not an ideology, it is a principle of what might be thought of as ‘the reality of the origin’. According to this principle, the Universe is a beginning that is connected to an end that is connected to a beginning. The Universe is a snake forever chasing and catching its own tail, if you will. In this way, creation and destruction are inevitably linked, they will occur time and again, and out of destruction something new will always arise.

So, instead of looking how to ‘fix’ the economy, as a society, we could decide that destruction may come about, because it inevitably does. The Phoenix will forever rise out of its ashes, possibly leaving dinosaurs and people in its wake, and so be it. There is no need to hold on to anything, because there really isn’t anything to hold on to, given that Brahma is the creator as well as the destroyer of worlds, and this Principle will do what it does. Instead of leaving the destroying to Brahma, we might as well do the work ourselves. In that case, at least we have a choice. We can allow for global capitalism to murder us all in a horrible way, leaving our once-blue planet to rock-eating bacteria, or we can change things around and decide to go in another direction. We might just say, ‘Brahma breathes in, and a predatory industry comes to a halt. Brahma breathes out, and a kinder way of living is born.’

(Inspired by events in my own life, as well as by the book of Noah Harari , ’21 Lessons for the 21st Century’​, I offer a way out of the mess humanity has manoeuvred itself into. Other than Harari, I go with Faith. This is a chapter from my forthcoming book, ‘The Good Life and how to find it’​.)